If It Feels Right, Do It! Don’t Over Analyse Your Inner Guidance! 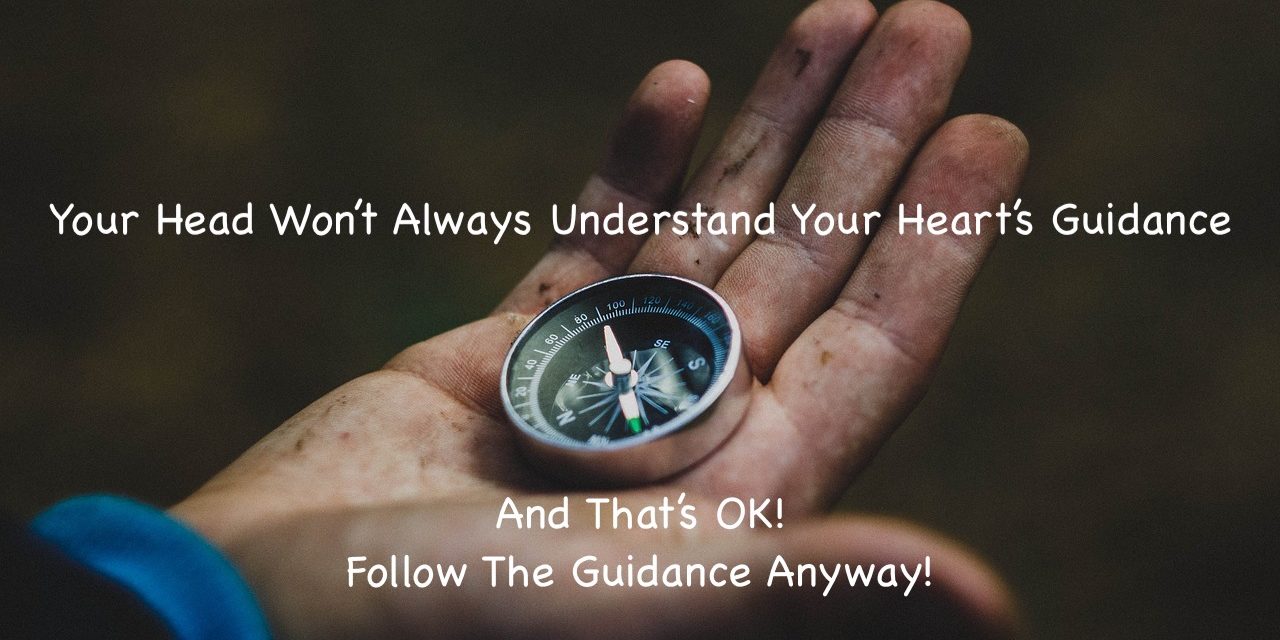 ✨✨It’s OK if your Mind doesn’t understand your Heart’s guidance!✨✨

When we are following the guidance of our heart it doesn’t always make sense to the Ego/ mind and that’s OK!

It doesn’t have too!!  And in all honesty, it often won’t.

In fact so many times in my life I have followed my guidance without any idea where it was leading or what the reason was behind the inspiration.

Some of these events were pleasant, some were neutral and some were quite challenging.  However I surrendered fully to each experience without the need to ‘know’ the ‘what’ and the ‘why’.

The ego needs to know what is going on to feel comfortable because the ego works from duality.  It needs to compare what you are being guided to do with where you are currently at and what feels comfortable.

Often I have only come to an understanding of the ‘why’ years after the actual events when, as part of the beautiful lesson I was guided to reflect on the path that lead me to a certain point in my life and then I realised that the path was so much longer and more circuitous than I had originally thought.

An example of this would be the creation of the Mundane to Magical Online Summit which happened in February 2019.

When I looked back on all the different events and opportunities and random connections with people that had occurred in order for that to happen I realised it went back 3 years of direct links but I could probably go back even further if I really thought about it.

It involved the random awareness of Youtube videos, the connection to the experts through sessions or online events, courses and teachings that seemed utterly unrelated and unconnected all leading perfectly to the inspiration landing and me being in a physical, emotional, mental and spiritual space ready to receive it and take action.

There were a few moments along the way where I was REALLY challenged, where the belief programs that had run my life up until this point were challenged so much that I eventually initiated the work to release them.

Layers and layers of emotional, mental, energetic pain, attachments, fear, beliefs, programs released through various techniques all perfectly times, guided and orchestrated.  Leading me to that perfect moment when at 4am I was awoken by the Universe with the name ‘Mundane to Magical’.

If that had landed a year earlier I wouldn’t have been ready to commit.  I know that to be true.  And even though I had no clue what I was signing up to when I committed to the Universe that night it was all perfect!

Our path is not a straight, direct route from unconsciousness to enlightenment/ ascension.  The Universe never lays out the whole map in front of you.

You are shown only what you need to know in this now moment to enable you to move forward.  One step at a time.

The point is for us to surrender to our guidance with trust and faith.  Allowing what will be to be.

Knowing in the core of our being, that we are being guided and protected along our perfect path by our highest aspect of self and that we are safe and always provided for.

The Universe never gives us anything we cannot handle but it can feel pretty close at times to the ego.  Especially when we are being inspired to stretch ourselves beyond our comfort zones or to release deep rooted pain or belief systems.